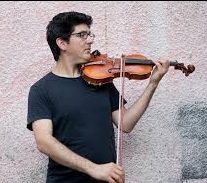 Violinist and pianist Israel Heller has played extensively in the Los Angeles indie rock scene with acoustic folk-­rock outfit The Pyramids as well as with members of The Mowgli’s before embarking on his first solo project on violin. Under his own name, Heller performed his experimental brand of techno pop violin from Los Angeles to Berlin all the way to Brisbane, Australia and Missoula, Montana. Israel writes and produces under the name Next Emissary and collaborates with a number of artists including singer/producer Jayne Wilcox and producer Grand Atrium. In addition to violin and keys, he sings and plays guitar, currently performing around New York City and Los Angeles.