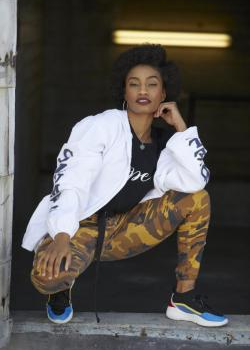 Rebekah Moriah Denegal, also known as Denegyal, born in BellFlower, CA, raised in Pasadena & South Central, CA grew up as a freestyle dancer, watching music videos & clown dancers for inspiration. Rebekah experienced her first form of training in West African Dance 2000 at the age of 7 in South Central, CA. From there she was in and out of various studios/companies such as Debbie Allen Dance Academy, Sue B. Dance Academy, and Eleone Dance Unlimited out of Philadelphia to name a few. Even though she had opportunities to train “professionally” she found her passion for dance freestyling at house parties, the Boys & Girls Club (Pasadena, CA), street functions, and traveling. At the age of 17, Rebekah Denegal found the Athletic Garage Scholarship Program 2010, she trained in ballet, modern, contemporary, jazz, house, salsa, and hip hop and from there she was introduced to Debbie Reynolds Dance Studio to study dancehall, Chicago footwork, whaacking, freestyle techniques, and old school vogue which expanded her skills even more. She was then booked by ” DanceHallFunk” for her first professional job as principal dancer for the Nicki Minaj ft. French Montana “FREAKS” music video 2012. Years later, she has worked with Missy Elliott, Iggy Azalea, Will.I.Am, B.E.P, Kehlani, and more. She has also featured on a Pepsi Commercial with Donald Faison and Joey Lawrence, trained with Rhapsody En Dance, and worked one-on-one with Rich & Tone for animation. While still continuing and conquering her dreams as a professional dancer, she’s also transitioning as a choreographer & expanding her teaching skills as well.