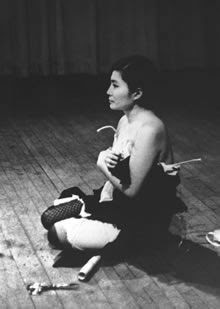 In 2011, the International Art Association officially declared April 15 World Art Day. (Why the 15th you ask? Not because of Tax Day! No, it’s Leonardo da Vinci’s birthday!) The organization hoped those celebrating the “holiday” would contribute to the spreading of “arts awareness”.

Well, at Heidi Duckler Dance Theatre we’re always happy to do our part in spreading such awareness! We asked our staff about the art that most inspired them. Here’s what everyone had to say …

Heidi—”I am inspired by J.M.W. Turner. What does an eighteenth century English painter of ships hold for a contemporary choreographer in California today? They say that Turner tied himself to the mast of a ship to feel the storm and place his body inside his painting. I feel the turbulent landscape when I see Turner’s paintings, the danger and passion of living, and they always reaffirm, for me, the power of art to help us get closer to that which we can never understand.”

Toogie—Toogie’s favorite piece dates back to her childhood, that’s as long as she can remember loving Salvador Dali’s work Geopoliticus Child Watching the Birth of the New Man.

David—”The most inspiring piece of art to me is Mark Bradford’s Pull Painting 1 because it makes me think about how much fun it would be if all walls were painted like that.”

Raphaelle—Mauvais Sang (1986), Director: Leos Carax
“This is one of my all time favorite works of art. It is visually stunning with moments of performance art and dance. Mauvais Sang stars Juliette Binoche, Julie Delpy and my favorite Denis Lavant. The story touches on relationships between generations, genders and social classes and best of all is a tragic love story about a disease that’s killing lovers. You must see it! My favorite scene is of Alex, in pain and running down the street to David Bowie’s Modern Love.”

Kira—Cut Piece (1964), Yoko Ono
“The first time I saw footage, I was struck by how it unfolds in near silence with only an occasional sniffle or nervous laugh. The questions at stake are so powerful – Who should participate? Who is implicit even if not active? Where are the boundaries of art, social responsibility, and trust? And Ono approaches these existential questions with such a simple and relational gesture. Though I’ve never been present for a performance, I instinctively feel connected with her, want to protect her, remember how fragile our social agreements are and how gentle we must be with them.”

Khayla—My favorite piece of art is the classical ballet Giselle. It has been my favorite ballet since I was a kid, where I would watch the Royal Ballet’s version on video constantly. There is something so hauntingly beautiful about it, and I find it equally as fun to dance it as it is to watch. Recently, Akram Khan’s adaptation of Giselle for the English National Ballet has become my favorite version, where its contemporary movement, setting, and issues of class divisions and betrayal have proved that the 1841 ballet is truly timeless. (View images here.)

Lauren—Do the Right Thing (1989), Director: Spike Lee
I watched this film for the first time in a sociology class when I was a young college student. The professor pointed out the way Lee roots the film in Robert K. Merton’s ‘Strain Theory’. It was the first time I realized that art could go beyond simply reflecting a time, place, and/or people—it can simultaneously expose the viewer to deep-rooted and decades- or centuries-old social systems and institutionalizations of which we’re not often consciously aware.