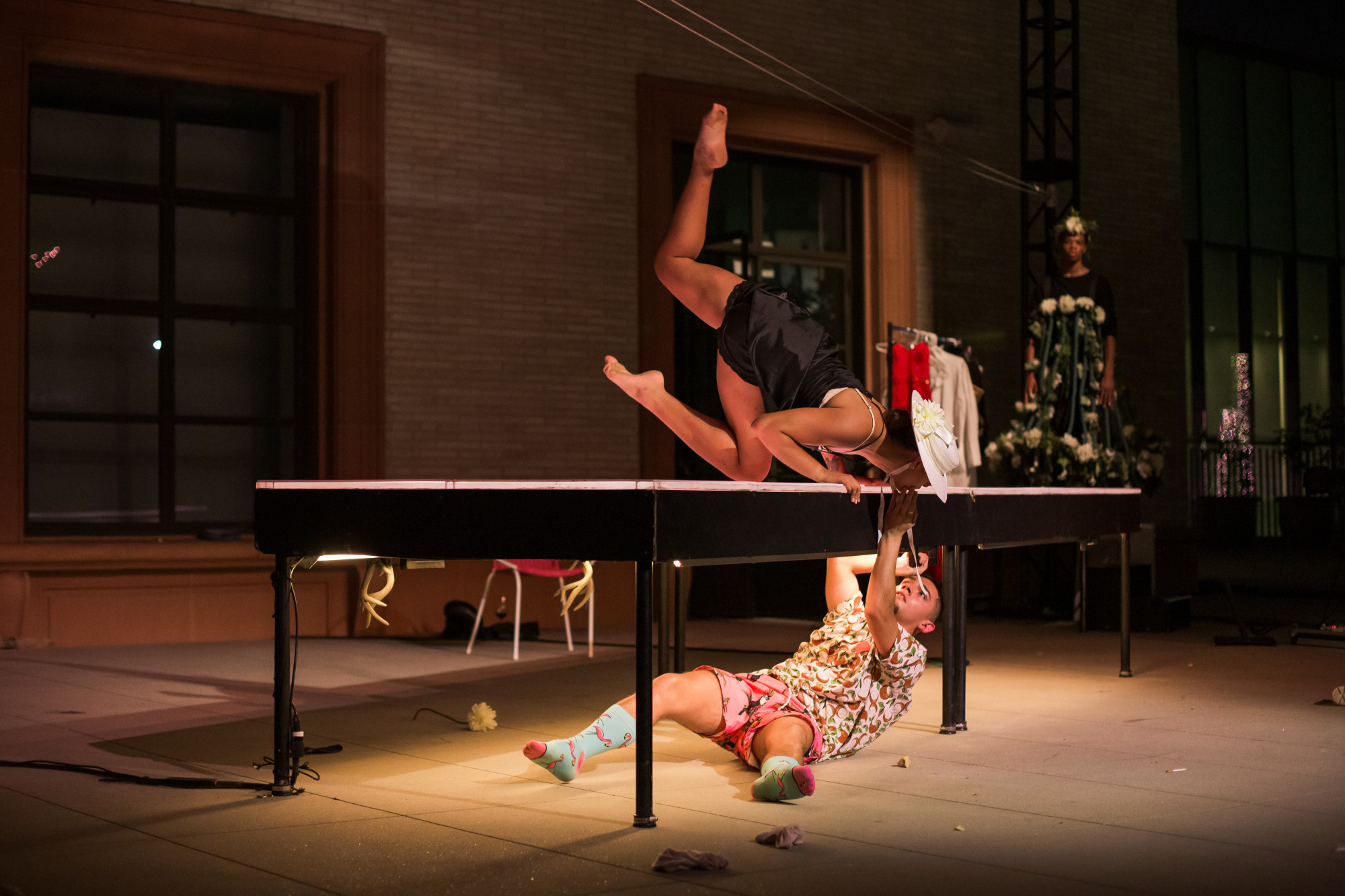 By Heidi DucklerAugust 30, 2021No Comments

Wallis Annenberg Center for the Performing Arts’ Summer @ The Wallis Presents Heidi Duckler Dance in the World Premiere of The Chandelier; A Site-Specific Work, Presented on The Wallis’ Outdoor Stage, Choreographed and Directed by Heidi Duckler, Au

They got hit with a double whammy. Not only were they sidelined first by the pandemic for a year and a half, but to now present “The Chandelier” all this time later, and still under many Covid restrictions, the entire piece, which was to be “site-specific” had to be reworked and reimagined.

Heidi Duckler, the Founder/Artistic Director of Heidi Duckler Dance, and Choreographer of the piece gave a short introduction explaining how this World Premiere presentation came to be. “The Chandelier” was inspired by a novel of the same name written by Brazilian Clarice Lispector and published originally in 1946. The book was translated recently from Portuguese into English by Magdelena Edwards and Benjamin Moser.

The piece was first constructed to be performed at the Wallis Annenberg Center, highlighting different areas and spaces inside and outside of the theatre, different architectural patterns and settings, to tell the story of a young woman, Virginia, through her own musings and ideations. That was the original plan, however with all the Covid rules and restrictions still in place, it was realized it needed to be performed outside, and contained in one space, with the audience socially distanced.

What was created was an innovative, stylized space that became different sets/places as the narrative unfolded, magically and mystically bringing her inner imagination to life.

And a rich, creator of concepts formed what morphed into the physical interpretation of those thoughts, ones formed by the recombining of former experiences to create new images and stories in the mind of this young woman, Virginia (danced with formidable strength and passion by Nicole Flores).

To add to the overall feeling and give a base, a solo cellist sat to the side and played throughout, being introduced as Composer & Cellist Isaac Takeuchi. Beautifully classic, sometimes mournful, blending into the feeling at hand to compliment the intention.

Outdoors at the Wallis, there was no wing space (the dark area in a proscenium theatre that performers make their entrances and exits from to go on stage, and sometimes change costumes) – it was non existent in this makeshift outdoor space, but ingeniously the props, the costumes and set pieces were all in view, cleverly moved and repositioned in the most interesting ways.

Since this was from the viewpoint of Virginia’s fertile imagination pretty much anything that occurred was rightfully odd and ambiguous as to it being real or imagined. It lent an idiosyncratic feel to the piece, both by how things unfolded and the narration, by Paula Rebelo, which was heard intermittently as a voiceover.

There are so many elements to this tale and this choreography. If I had read the novel previously, I am sure everything presented would hold more evident meaning. The dancing was wonderfully executed, and interesting to watch. The story was hard to follow, although when I tried less to do that, I enjoyed each section as they occurred in real time, and just went with the flow, so to speak.

Obviously a well-trained, diverse company of dancers, that worked well together to create a vision with the tools they had available. Remarkable, really. No doubt there will be many different interpretations from viewers, but the movements gave you a sense of what was happening and what the characters were feeling.

Described as the “Nucleus,” two dancers in some rather whimsical designs, one dressed as a fancy chandelier, appear on a set that included wardrobe racks with clothes hanging on either side of the stage, an oblong large table set at a slant in the middle and clotheslines on pulleys that crossed from stage right to stage left and back, above the table. Also an array of odd shaped lights clumped together center stage that represented “The Chandelier.” Their duties, as the Nucleus, or core, were to keep things going, prompting the main character to change wardrobe by shooting her outfits out on the clothesline to her, one by one, while she dances on top of the table, enacting several different intense emotions, with the wardrobe changes guiding her in different directions. The Nucleus moved the actions along throughout this tale and generated the flow.

Most of the dance movements were modern in style. I particularly liked the slow-motion faux badminton game the dancers skillfully accomplished. Ms. Duckler’s use of the space she created was full of details, nice patterns and everything on stage was put to use.

The other characters enter and interact with Virginia, making good use of every inch of space by dancing under, over the table, vigorously acting out their relationships with Virginia; her mother, her brother, Daniel, her lover, Vicente, and his friend/lover Adriano.

It seems Virginia is on some kind of journey in learning about who she is and working out her past. She is first at home with her overbearing mother (danced by Himerria Wortham) and brother, (enticingly danced by Javan Mngrezzo) as they go about their daily activities, cooking, eating, squabbling, until her obsession with changing her look, her outfit and mood in which each of them she embodies the style it favors, beginning with childish togs, progressing to womanly attire, wanting more than just her tumultuous home life.

There are many wardrobe changes we are privy to while there is some lovely dancing by everyone to the ominous melody of the cello. Also a nice men’s section with lifts placing the women under, over or on top of the long table that serves as many things.

The outfits get fancier and sparklier, sometimes being put over the last outfit, and finally she seems to like one she wants to keep on. The scene then switches to an establishment of some kind with people milling in and out, where we find Virginia getting tipsy on some red wine. The two men featured in this section, Vicente (Alejandro Perez) and his friend and part-time lover Adriano (Adrian Hoffman) are playing a ridiculous and suggestive game, with each having an end of a long loaf of bread in their mouth, a teeth-grinding tug of war taking place in a very roughhouse way. Things escalate and there is more whiskey drinking and scuffling with one another until they fall all over themselves.

Then Virginia notices Vicente and she is instantly smitten. They begin a drunken seductive dance and both end up on the floor in a stupor. This then becomes a pas de trois, adding in Adriano, all becoming more inebriated until the three have danced atop the entire length of the table to the opposite end where they drift off to sleep, spooning with each other.

Next it is just Virginia and Vicente, slowly disrobing each other then slow dancing, more drunk than ever, him precariously lifting her during their loose pas de deux, becoming more explicit in their movements, and appearing sloppy-drunk but still executing some nice modern floor work.

The next scene is lit in silhouette to imply Virginia is being intimate with both her lover and Adriano.

I’m not quite sure of the sequence of the following occurrences, but next we see Virginia very distraught, believing she might be pregnant, even throwing up over the side of “the table.” Following that, she learns her grandmother has passed, so she goes back home. When she gets there, she finds she doesn’t fit in there anymore, hence the impromptu badminton game enacted to show she is a changed woman and doesn’t fit into her old life anymore.

So it’s back to city life, although that’s not working out well, either. Back at the “establishment” everyone is being silly while drunk and really freaking her out. She crawls on her knees under and on top of the table to avoid them but keeps getting tripped up. As it all intensifies, somehow, after being tossed about and mistreated by the men, she is left lifeless. After drawing an outline of her body beneath her the men start touching her all over, poking at her, being disrespectful.

Again, I get a little lost, story wise but the next section is done with a very long, billowy, filmy white scarf draped around Virginia, as she dances in and around it, arching back into a backbend as the scarf floats over her. It is beautifully performed by the hard-working cast.

The Nucleus held each end of the scarf, waving it like an ocean current in fluid motion. She

rolls herself up in the scarf, with the music becoming more harmonious and melodic. It made

for an interesting and mesmerizing interlude.

A sensuous voiceover begins, “I am the lover…” as Virginia is handed a suitcase, which she opens, taking out a jacket that she had tried on earlier that has all different sizes and shapes of straw hats hanging on it and dances, the movements reflecting the words to the poem… “she is the dark room herself…” becoming physically tired as if from an invisible wound”… “How it is incomplete to live…”

An overlong segment ensued with them spreading sand all over the table, under; which becomes a splashing display of sand-ography as Virginia wildly thrashes about dancing amid it all.

We hear the sound of a train approaching while she is changing wardrobe once again, to mostly black attire, as the rest of the characters meander back in behind her and end up freezing on stage in positions as Virginia’s actions were highlighted, seeming to go back home once again.

Back with her mom and brother, they go about their eating rituals through movement that becomes a parody almost, of their own behavior. It soon becomes an all-out, very busy, wacky party with some nice solo work and solid modern floorwork by Nicole Flores. Progressing into a frenzy, the accompanying cellist playing more intensely, the conclusion being… she is no longer with us.

The music abruptly stops and the lighting changes, the rest of the characters except Adriano wander away and leave stage, as he stands where Virginia’s dead body lay, weeping, sobbing, hyperventilating, not able to stay in his skin, you could say “freaking out,” takes another moment, calms down, and exits. Silence.

Virginia’s machinations are subject to many different interpretations, and the ones I’ve expressed here, are but my observings, watching it performed live, albeit without knowledge beforehand of having previously read the novel.

This piece was a massive undertaking that was filled with imaginative details and expressive dance and movements. Kudos again, to the strong, committed dancers who performed it.