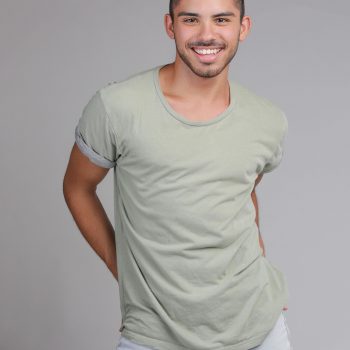 Santiago Villarreal, found his passion for dance at age 16. In May 2019 he graduated with a BFA in Dance Performance from Chapman University. During his time at Chapman University, Santiago has worked with choreographers such as; Ido Tadmor, Dwight Rhoden, Wilson Mendieta, Julianne O’Brien, to name a few. Additionally, he has attended workshops from companies including BODYTRAFFIC, Complexions Contemporary Ballet, and Backhausdance. In 2017 Santiago joined Backhausdance as an apprentice. With Backhaus, Santiago performed works by Walter Matteini, Mauro Astolfi, Dwight Rhoden, Yony Soutchy and Jennifer Backhaus. Santiago is now a Backhausdance company member and freelance dancer and choreographer based in Los Angeles, California, where he has had the opportunity to work with LA-based companies such as Jacob Jonas The Company, Hedi Duckler, and Ate9.